This 3 second video is definitely in my top favourite moments. It’s early morning, Emma and Mike have already set out and then these children come whirring by on their bicycles, pedalling fast down the hill that aspires to be a mountain. Calling out in that joyful way of children: “Morning!”

“Morning!” I almost sing back to them.

As they whizz into the distance, I am left with chirrups and bird noises.

It was here also that we discovered a mini but potentially lethal scorpion sleeping under our blue barrel.  These ones can put an adult in hospital and kill small children or the elderly. How do I know? Robert told me. And he knows as one stung his uncle. This article tells you more but essentially, what scorpions don’t have in pincer size they make up for in lethal injection.

Emma and Mike have to tackle huge hills up and down along this route. Some of it on a”corrugated road”, which is exactly as you would expect but probably worse, bumpy in the car and worse on a bicycle or on foot. A combination of bumps and soft sand. 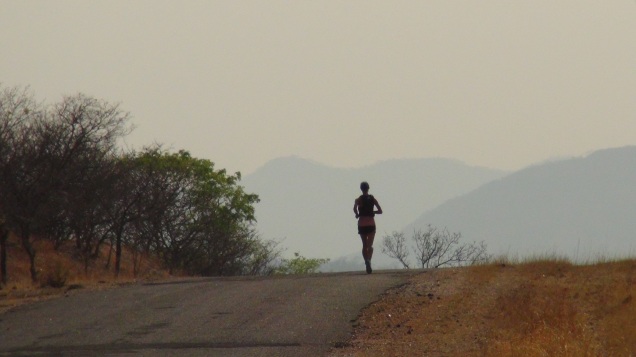 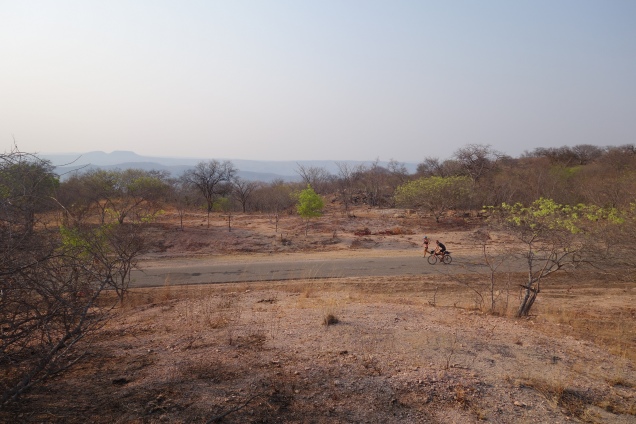 Meanwhile at the less impressive end we have had flies in our eyes! Mopane flies are technically bees but then you wouldn’t be able to bond with me over a love of “Catch 22”. They are in our eyes, and ears and up our nose, busy collecting our secretions to make into honey, so Robert says. Which is amazing. I am the source of honey, I have no idea if I make good tasting honey. (Wikipedia says they are only collecting moisture but what does Wikipedia know, there’s no moisture in my ears). The little things are remarkably robust. I more than carelessly pinch them out the corners of my eyes, and they regularly stretch themselves out to fly off my fingers. However, They don’t help to make Emma as comfortable as possible. Cooking dinner is a test of my focus and inner zen. We resort to hiding ourselves in Cleopatra with the air conditioning on until it is dark and they fly home to bed.