As part of our preparation for Emma to run across Africa, Emma suggested that we did a practice run of 100 miles! Its really hard to take someone seriously when they are utterly casual about a huge endurance event. On Wednesday 26th March we met up, looked at the Cotswold way, thought about things we needed and that was it. Thursday, I travelled to Norfolk and bought the 21 year old car we are taking to Africa and named her Cleopatra. Two weeks later we drove to Bristol to stay the night with a friend of Emma’s and start the trail in the morning. Emma’s running, Mike’s on a bike as support, and I’m in the car.

As soon as the 6.30am alarm goes off, I’m up making porridge and tea. Emma’s a sleepy bug in the morning which gives me a chance to get everything ready. Mike eats all of his and some of Emma’s too, I think, which is satisfying for me as the cook. When we get to Cleopatra, we notice a small green oily/viscous puddle under the front nearside wheel. I’m worried. I take some photos and send them to Lukas for a diagnosis. Its 7.30am so we get going whilst we wait for a reply.

Bath is beautiful but it feels odd. Emma’s about to do something epic and there’s no-one to see except Mike and I. I guess that happens a lot in the world. Emma, wanders off to the fudge shop.

Emma and Mike set off appearing very relaxed and I skedaddle to get things we need and chat to Lukas over the phone about Cleo. He diagnoses the fluid is grease from the front axle air vent and tells me where to look. I love poking around under the bonnet. It’s a giant toy. Lukas tells me I should be fine until I get it back, he’s a little concerned when I tell him I’ve got 500 miles to go. I’m a little worried by his concern and drive more carefully.

Cleo’s cigarette lighter doesn’t work, which means we can’t charge the sat nav (or phones) and her compass always points north. I navigate my way out of Bath by using the sun – seriously – I head east and then when I feel roughly out of Bath I head North looking for signs for villages near the first check point. And I make it! However, its way past the time so I hazard a guess that Emma and Mike have carried on and head on into the higgledy piggledy land of the Cotswolds and get lost. Well and truly.

Me “Excuse me, could you tell me where I am and where I’m going?”

Them “You’re off the map, about here, take the next left, its signposted Nowhere [or some place like that]”

The next left didn’t have a signpost.

This becomes a general theme of the trip. Fortunately, Emma and Mike are two of the most easy going people you can meet and are just happy to see me, even when I get to check points after them. They never complain about anything. Not once. Mike is a bit concerned about the amount we’re spending on food at one point. I like my food. And Emma, on Saturday night, gets serious about starting early in the morning. That’s as demanding as they get.

Happily, this time, I am early for lunch. Its a gorgeous sunny day and the birds are nattering away. A few minutes later, Emma and Mike appear trundling down across the field and Hayley (our guest for the day) pulls up in a car. It’s idyllic. I feel there should be more drama on a 100 mile run, not chilling in the sun. Lunch is delicious. Chicken, avocado, basil, tomato, salt and pepper – I made it myself. Mike falls asleep and Hayley and Emma are busy catching up and laughing.

After lunch Hayley and I head to the campsite and arrive at around 6pm at what looks like a stately home, (after an unquantifiable several mile road works detour, inability to find the campsite, food shop and a panic over Cleo puffing out smoke).

Not long after, Emma and Mike arrive both looking shattered. Emma wraps herself in her sleeping bag in the tent and is still cold. This worries me. She’s run 35 miles and the food isn’t ready yet. Eventually, Emma goes for a shower to warm up. Mike gets busy helping us get the fire going. I’ve splashed out on the first meal,  and using the gas canister and the Kelly Kettle, Hayley and I manage to cook: mashed potatoes and broccoli, followed by steak and mushrooms. That’s better than I cook at home. But I believe food is important for this kind of thing. Emma is a lot better after food and a shower. The trickiest thing is persuading her that she doesn’t have to do anything, she’s running 100 miles. Kindly, North Nibley campsite lets us off £4 as a donation.

I’ve forgotten how slow, cooking is, on a gas stove. The porridge is not boiling and the 8am start is not happening. There’s a general sleepy, happy, feeling. Emma is stretching and Mike gets a brew going.

Once we’re all off, I am swiftly lost and take up talking to myself. We get on remarkably well but an extra set of eyes to look at the map and road signs would be more useful than a split personality. “Uley” I shout with joy for no-one to hear (it’s a village that means I’m going in the right direction). And am 5 minutes late for mid-morning break. Emma and Mike are both quiet. They went in the wrong direction and its dampened both their spirits a bit. Emma’s cold again and I worry whether she’s getting enough food in her. I shouldn’t really though, when I next see them, they are both chipper. Its an odd relationship, me dipping in and out of their experience. After lunch, Emma wants to push on as far as she can and gives me 5 options where she might want to be picked up from. I get busy with finding accommodation nearby. Happily, I find some out the back of a friendly pub. Emma and Mike call me to come and collect them. I’m there first (woohoo!) and surprised when they both come bounding up to me – turns out they’re both rushing on CLIF gels. 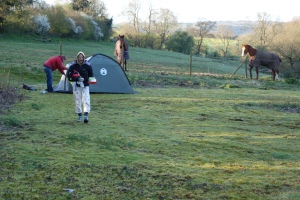 Emma wants a quick, early start. We’ve no fuel for cooking so that’s easy. After the mid-morning break I have 3 hours until lunch. In my head, I plan a yoga session at the meeting point. But, decide I can’t miss Cleeve’s hill, the highest point on the Cotswold way, and there’s a chance I’ll see Emma and Mike and can cheer them on. I have a little faff parking the car, pick up my water, and not my phone, then set off upwards. Near the top, 1 metre above me, Emma runs by. That’s uncanny timing.

She looks worried, “I can’t find Mike. He wasn’t at the checkpoint.”

I pass her my waterbottle as Mike was carrying her water for her. She hasn’t had water for an hour. But, she’s much more worried about Mike. I promise I’ll call him and go back and look for him. I’ll be honest, I don’t think anything has happened to him, he wasn’t on a tricky part of the route. I’m expecting him to have moved on to the next check point. But Emma’s running a 100 miles and run about 80 miles at this point and I’m only going to do the thing that puts her mind at ease fastest. It takes me 40 minutes to get back to where Mike should be – no, I wasn’t lost, it was fiddly. I’m literally 2 minutes away (sigh!) when he calls to say Emma hasn’t arrived and he’s moved on to the next check point. I explain where I saw her, turn the car around and head for lunch. 30 minutes later Mike calls again. She’s not arrived. This is concerning. Have they missed each other again? Is she lost on the Cotswold way? Is she hurt? She hasn’t got water or communications, as her phone isn’t working. I go to the furthest point I think she could be, park the car and start walking back. I agree to meet Mike at a monument on the way but, he decides to wait a little longer. I’m asking everyone if they’ve seen a thirsty looking woman, with red curly hair, running the Cotswold way.

Then, they are both coming towards me on the path. And there’s just a bit of an atmosphere.

Apparently, they were waiting for each other in different places. Emma’s frustrated,

“Shall we meet at Winchcombe or Hayles Fruit farm?”

I figure annoyance will power her to the second option (but, obviously, don’t say that). We make some quick decisions and I join them on the run back to the car.  Its gorgeous and I’m bounding with joy at being out in the fresh air and having found Emma. The tension quickly lifts. But don’t mistake me, that is not happening in Africa. I get back in the car and muddle around in single track lanes before arriving for lunch 2 minutes after Emma and Mike, who are both cheery when I meet up with them (I reckon they’ve been on the gels again).

My mum arrives with chocolate brownies, which makes everyone happy. Emma and Mike go for ice cream at the farm shop.

After lunch, dinner and campsite are sorted quickly, I’m half an hour early in idyllic quiet Broadway, reading the manual for Cleopatra. Emma and Mike come companionably up the road. I join Emma and run to the start of a hill. Then, Mike and I scoot back to the car, load up the bike and drive to the top (cheeky). We’re all getting giddy, the end is so close.

Unpacking the bike. I wait to film Emma as the sun begins to set.

The fields are a gorgeous colour of yellow flowers, set against green, on one side of me is  a fading pink sky and on the other an almost full moon. Cars are rare and, mostly, all I can hear is the wind and the birds. I stop for a film shot, as I realise Emma will run right past me and then, race her the last 2 miles to the finish. Parking up the car in quiet and serene Chipping Campden, I head back down the Cotswold way with the camera.

Dusk, and Emma comes round the corner, friendly and smiling as normal. Jogging and filming is ridiculous. Emma’s more worried about me falling over whilst filming than the fact she’s run 40 miles in one day. You’d think she had run only a mile or maybe two. I run with her the last 100 yards. We can’t find where it officially finishes and wander around a bit confused. To be safe, Emma taps the War Memorial and Tourist Information. (The official point is the War Memorial.) 107 miles run in 3 days. Total running time: 23 hours and 38 minutes including detours and waiting.

To celebrate we opt for beers and wine in the tent and, a lie in in the morning.